An audience of over 200 Coquitlam residents were given a strong message regarding coexisting with bears: don’t feed the wildlife.

The Fur-Bearers attended a seminar on wildlife coexistence sponsored City of Coquitlam at the Evergreen Cultural Centre in Coquitlam last night. The city saw 15 black bears killed last year and one so far this year for behaviour associated with ‘habituation,’ specifically an increased comfort around people due to constant access to human or anthropogenic food sources.

Mayor Richard Stewart spoke, sharing an anecdote about reporting his own neighbour for improperly storing attractants that bring bears into close proximity with people. Luci Cadman of the North Shore Black Bear Society was the headline speaker for the evening. Cadman spoke briefly about various types of wildlife in and around Coquitlam (such as coyotes and cougars) but focused primarily on black bears.

Cadman’s major speaking points and responses to questions indicated that the largest issue leading to human conflict with black bears – and the subsequent killing of black bears by conservation officers – remains attractants. Properly securing waste and only taking it to the curb the morning of its pickup can play a major role in reducing conflict. Cadman also noted that bird feeders, which are popular in backyards right across Canada, can be major attractants for hungry bears, too. Bird seed is easy to access by bears, has high caloric value, and is a reliable source of food; if people in areas with bears or bear conflict want to feed birds, taking out a small plate of bird seed and removing it immediately after the seed is gone (and cleaning up the area) is the safest bet.

Many residents asked about who to call when they see bears, as a general fear that contacting the Conservation Officer Service would result in a bear being killed. Cadman told the audience that there are very few officers in a very large province, and they sometimes only respond after multiple calls due to how few available officers there are.

The Fur-Bearers had a table at this event, distributing information on coexistence solutions for various types of wildlife and the programs and educational campaigns run by the non-profit.

To learn more about the North Shore Black Bear Society and their incredible work to help bears and communities visit them at https://northshorebears.com. 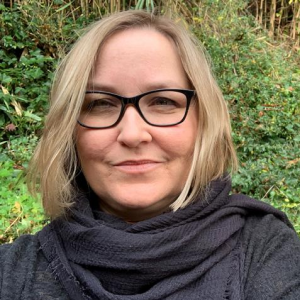 A former wildlife rehabilitator, Marcy has been involved with all aspects of helping wildlife since 2003. From caring for individual injured wildlife, to now helping to advocate for their protection, Marcy has a variety of expertise to help wildlife. Marcy was involved with helping oiled wildlife in a Burrard inlet spill in the mid-2000s. She was the Secretary on the board of the Oiled Wildlife Society for four years. She was treasurer on the Wildlife Rehabilitators' Network of BC Board of Directors for seven years and currently is treasurer and secretary for the Animals in Science Policy Institute. Her various administration, speaking and coordinating experience have also made an impact in her work. Working for The Fur-Bearers since 2014 has been the best place to transition to after working in wildlife rehabilitation.

Pacific Wild is taking the government of B.C. to court over the methods used as part of the ongoing wolf cull, which they’re calling unconstitutional.

Media analysis: Wildlife get the blame, but people start conflict

People start conflict but animals get the blame. Michael Howie explores how the media falls into this trap.

Talking With Bears: A moving tribute to Charlie Russell

Kathy Saunders reviews Talking With Bears by G. A. Bradshaw, a moving tribute to the life of Charlie Russell.

What working in Zambia taught me about conservation

Conservationist Ana Giovanetti learned the importance of community in conservation while in Zambia.

Owners face fines, dogs get bans from provincial parks. Do you think there are fair solutions that consider both dogs and wildlife?